Tragedy and the Aftermath

Tragedy and the Aftermath

I routinely talk with adults who are angry with God because they lost their job or are going through a divorce or experiencing a loved one’s death. They are hurting because life hurt them, and hurt them hard, and so grasping outward in desperation they knock on my office door and through bitter tears tell me what’s wrong. And then they ask the million-dollar-question: “WHY?”

My job in the parish is not to explain away the hurt with theological answers and doctrinal statements. My job is not to answer the question “Why?” My job is the exact opposite. I help them enter into the pain, to confront it, to even embrace it, but the key thing is I do not let them do it alone.

It is hard to trust God when your home is filling with water.

Hurricane Harvey dumped a good 3 trillion gallons of water on my hometown of Houston, Texas, in the span of 4 days. 4 million people in the city limits and 6.5 million if you count the surrounding suburbs, were afflicted with intense and unending rain, flooding, and the wind.

When the hurt piles up and your mind feels like it’s being shaken to pieces, the single most important thing you need at that moment is a clear sign of hope and some semblance of support. People who were three days without power, running water or toilet paper saw the Adore Ministries van as a beacon brighter than the sun. Handing pregnant moms cold bottles of clean water made me feel like the most pro-life person who has ever lived, more than any political rally ever has. Coming back two hours later with even more supplies made me feel more like a Christian than ever before.

The desperate man sitting in my parish office, or the neighbor recounting her horror story of evacuating at 2:00 AM, or the Adore missionaries giving toilet paper and baby formula to impoverished mothers all share one thing in common: Christians are going to walk them out of whatever Hell they are going through.

Pope Francis calls it “accompaniment.” Pope St. John Paul II called it a “spirituality of communion.” Followers of Christ do not run from the suffering of others. We give ourselves.

Our task as Christians is not to solve someone’s hurt, but to remain with them and “weep with those who weep,” as Paul says. We could not prevent the tragedy but we will not abandon people to it. We walk along side those suffering to take them from Good Friday through the silence of Holy Saturday and, ultimately, into Easter Sunday resurrection.

Our task as Christians is not to solve someone’s hurt, but to remain with them and weep with those who weep.Click To Tweet

When news outlets report on the “aftermath” of a natural disaster they will talk about it in economic costs and statistics. There will be tallies of the loss of life and injuries. There will be interviews that practically exploit people’s suffering for ratings. But for Christians, the aftermath is only measured in newly formed friendships.

This accompanying is the mission of Christ crucified. He entered into absolute solidarity with sinners, while himself not sinning. He experienced our condition and our suffering but did not leave it there. Jesus redeemed suffering itself. He entered the suffering we feel so that we would know that we never suffer alone. The cross is God’s pledge of solidarity with the sinner. Yet God’s pledge is transformative. He took our sin and gave us His grace instead. “Though He was rich for our sake He became poor so that by His poverty, we might become rich.”

The aftermath of a tragedy like Hurricane Harvey is that a lot of Christians start immediately giving away their money, possessions, and time so that those who are afflicted can begin hoping for restoration. Sacrificial giving mirrors the self-emptying love of Jesus Christ.

The world gives out of its surplus. It lives by the motto: “Give until it hurts”. Then it stops giving. The truly Christian idea is to give until it hurts, and then keep on giving. Mother Teresa said if we keep giving then soon there will be no more hurt, only love. 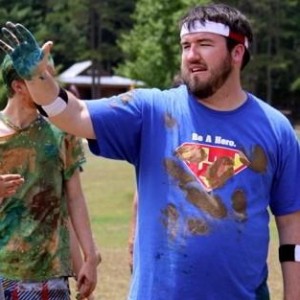 Michael has traveled all over the world preaching the Gospel to teens, college students, young adults, and even parents using humor, knowledge and the grace of the Holy Spirit. He has done it all and seen it all, all while raising 4 kids with his beautiful wife Shannon.

Find out more about Michael and his ministry at LayEvangelist.com

Michael has traveled all over the world preaching the Gospel to teens, college students, young adults, and even parents using humor, knowledge and the grace of the Holy Spirit. He has done it all and seen it all, all while raising 4 kids with his beautiful wife Shannon.

Find out more about Michael and his ministry at LayEvangelist.com

Join the conversation about Tragedy and the Aftermath over in our Facebook group. GO THERE NOW
[insert page="sidebar" display="content"]